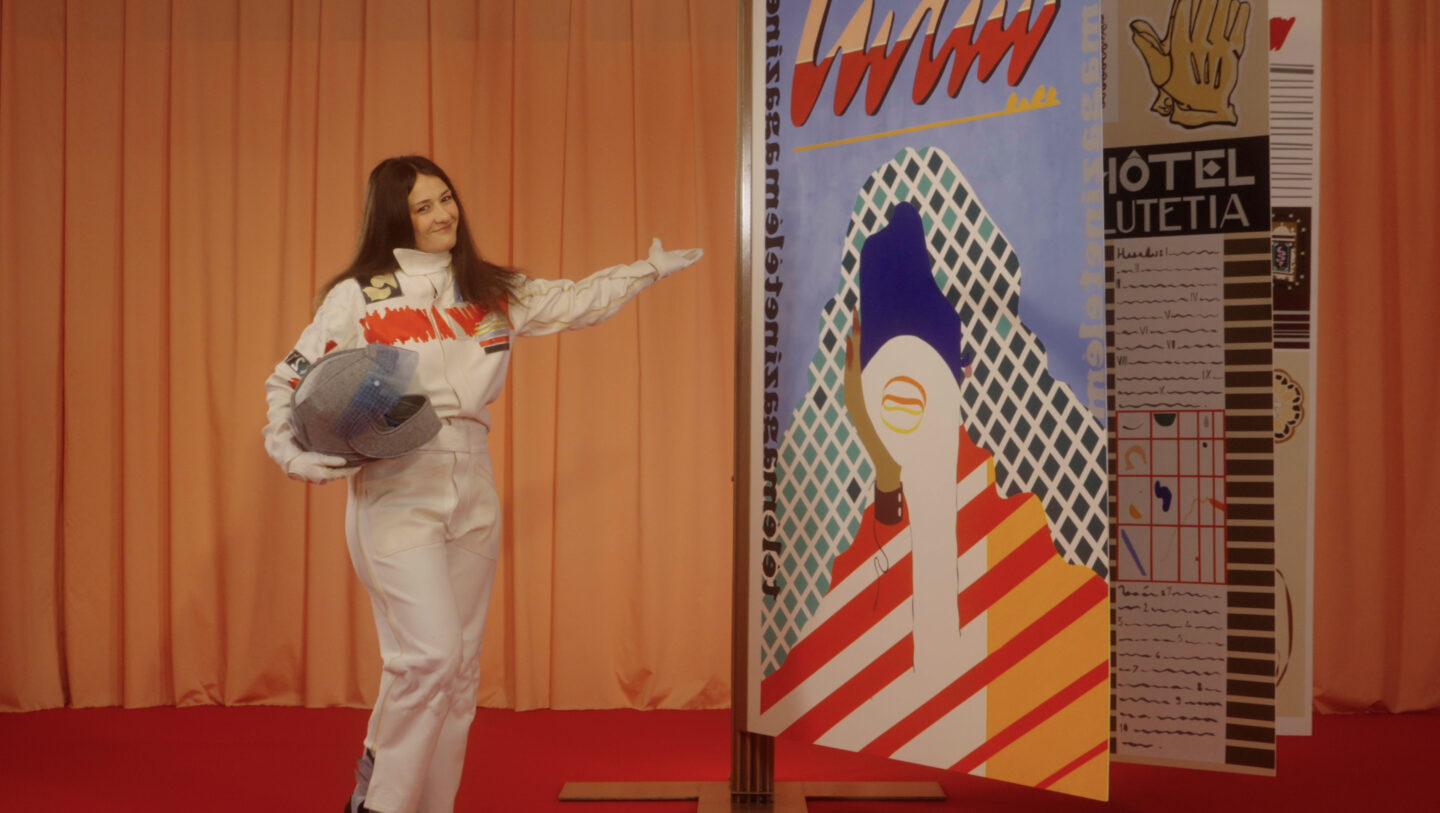 Charlotte Khouri, whose work spans performance, video and sculpture, pointedly questions our relationship to history and to the power of information. Since her childhood, the artist has been fascinated with mass media (press, television, radio) and the way in which they assert power, format minds and manipulate attention. Produced by the CEAAC, You’ll always be taller than a newspaper revolves around the material realisation of a giant newspaper and a series of small-scale objectified versions of ‘architectures of power’ (headquarters of TV channels, European institutions, etc.), which will be used for performances in which the artists appropriates the codes and imagery of television.

The film resulting from these performances is at the heart of the exhibition, which furthermore includes the sets and props created for the occasion, here repurposed into seats and screens. Investigating the concept of ‘mind control’, the film consists of a ‘day’ and a ‘night’ part, in which two protagonists in rally driver outfits are seen performing in front of a camera. According to the artist, they represent modern knights, conjuring the idea of a race or quest to gather information. The daytime part of the video shows the artist grappling with a giant newspaper, trying to decipher its content by interpreting the graphic signs and images, while physically measuring herself up to the outsized implement. The second part features the actress Marie Baxerres in a nocturnal atmosphere performing a startling tap-dance number on a podium that replicates the architectural characteristics of the rotunda of the Palais de l’Europe in Strasbourg, the headquarters of the Council of Europe. For a return to reality, just click your heels together three times like Dorothy in The Wizard of Oz…

Charlotte Khouri (b. 1985 in Haute-Garonne) lives and works in Paris. She graduated from the École supérieure des beaux-arts de Marseille (2009) and the Haute école d’art et de design (HEAD) in Geneva (2012). In 2019, she participated in the Salon de Montrouge with the video installation Investiture cœur d’argent and completed a residency at La Galerie in Noisy-le-Sec, where she presented her first personal exhibition, Dauphins, Dauphines (2020). In parallel, she co-directed the video Culture Générale Générale (2021) with workshop participants at Fondation Lafayette Anticipations in Paris.

The production of Charlotte Khouri’s project was generously supported by the Fondation des Artistes and ‘Mondes nouveaux’, a funding scheme set up by the Ministry of Culture as part of the French government’s recovery plan.